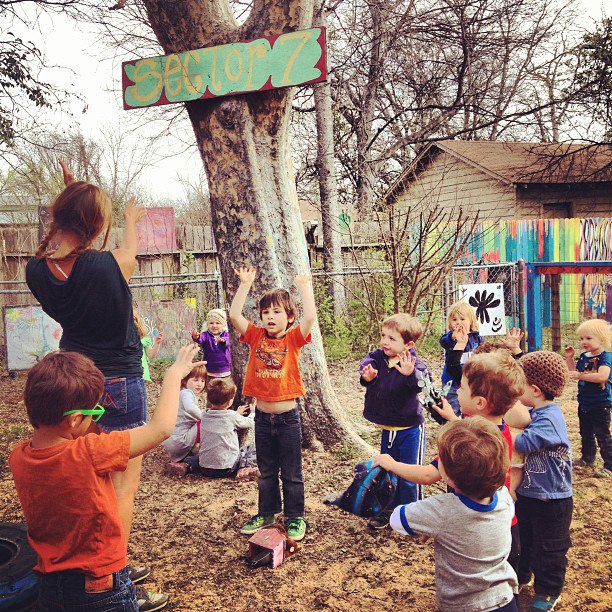 Often when one strolls through the alternately gooey or dusty mess that is our playground we find that our overarching philosophy is lost in the daily muck. Sometimes our school looks like a circus. Often it is difficult to see the worth in allowing children to be covered from head to toe in brown paint. But we assert that by creating an environment where the children are free to decorate the school and themselves as they see fit, we are removing the false security of rules which are adult created and adult enforced – which ultimately have very little to do with anything other than tradition or etiquette. We are actually setting the children up for the extremely complicated and difficult task of self-regulation and self-discipline. If we allow the children the freedom to explore all the possibilities that any given situation can offer, we are guiding them to a truer sense of who they are and how they think about the world. Similar to the seemingly insignificant and unrelated little dots in a pointillist painting, each day at the Hutch joins with all the others to create an incredibly beautiful work of art.

At Habibi’s we have attempted to create a world where a child is as free from the external pressures and expectations of our culture as possible. We realize that often we make assumptions about children entirely subconsciously – due only to what we think we remember about how childhood should be and what a child should do – and have therefore spent an enormous amount of time and energy delineating and exposing our prejudices and preconceptions about childhood. Habibi’s Hutch is a child’s world. At the Hutch our children are immediately attended to and can sit oftentimes one-on-one with a teacher for hours on end in an open-ended Socratic discourse on everything from bicycle riding, to literature, to physics,to death. This is a unique opportunity that is available at Habibi’s. Even in our homes we are almost never able to put the rest of the universe on hold for nine hours and listen solely to our children’s wants and needs (nor should we- home is for Family not just Child). Likewise in our homes children can’t jump on the couch covered in paint with clay on their fingers, because it is not solely their house, it is the family’s house. The old house called Habibi’s, however, is their house. We have attempted to create a place where they are jointly in charge of the activities, arrangement and use of this, their space – a place where they are not just biding their time until Mom or Dad gets off work, but a place uniquely their own, where they are in charge of their day.

We do not have rules at Habibi’s save: “Don’t hurt anyone including yourself”. What we have instead are reasons. As stated, we have absolutely all day to talk to the kids. We never have to rush through something because it’s time for language arts or math. So we spend a titanic amount of time talking with the children about why things aren’t going exactly as they would have them at any given moment. We don’t want children who are unthinkingly subordinate. We want children who will understand the rules that arise in other places in their lives and follow them because they make sense. At HH the child’s desires and needs are paramount, but the teacher’s role is not simply a supporting one. It is an active and guiding role – like a master craftsman in an apprenticeship relationship. Our goal at Habibi’s is to be scaffolding that guides and supports the work in progress that is our children’s cognitive development. We are mentors.

Our kids leave the Hutch with so much more than their ABCs and 123s. They all leave with a sense of themselves and a wonder and drive to know more about themselves and their surroundings.

When learning is isolated, as it becomes in Kindergarten and is in most preschools, the child does not have a larger sense of “the way things are” either in math, science or language. What we provide for the child is a big picture about what learning entails in preparation for the picking apart of the written or oral language or the base-ten system (or whatever else) that follows.

For questions regarding the waitlist or enrollment, please email us at: habibis.hutch @gmail.com

**If you are already on our waitlist, you may visit during the hours below as long as weather permits.**